App Blocker Data Saver is a free and unlimited local VPN (Virtual Private Network) application that allows you to block the network traffic from any of your installed applications and eliminate the background data transfers they are doing.

This allows you to control which applications are currently allowed to access the Internet and consume your cellular and wireless data.

► Don’t forget to give us a review if you like us.

SVGKit is a Cocoa framework for rendering SVG files natively: it’s fast and powerful. Some additional info and links are on the wiki

Load SVG from a Bundle Resource Load SVG from a Bundle Path Single RealmObject from a Stream:

Converting your Java classes using the default config from ydanila you might want to look at the Sharpen support classes from ngit:

Set your Java/JDK version to 1.7

Note: This is a sample config and a great starting point

Note: Make sure that you are on the develop branch of Sharpen!

Convert Java to C# (with config)

Your converted C# classes will be located NEXT the original source directory, /Users/sushi/code/github/PlayScriptParser, in my case, the asc.net directory

I needed to convert some Java code to C# and one of the best ways that I ever found is to use Sharpen. This used to be available as a Eclipse plugin but you can find a cli version at Mono’s Github account:

So you need to have a Java 7 install. An easy way if you are already using homebrew, is available via a cask:

Note: If you get errors, make sure that your casks are updated, brew upgrade brew-cask

Now I can build and run sharpen, i.e.:

In adding support for incremental MSBuild support for Mono’s Jay (Yacc-based) parser generator I could not get my resulting MSBuild target to automatically add the import statement to the .csproj via the nuget I created. The .target file was functional and correct and inside a “build” dir, but it would not update the project file, over and over I tested, looked at different nuget version, re-read the docs, etc… still no luck…

I ended up reading the blog posting for the Nuget v2.5 release for “Support for Native Projects” was my answer:

the file name must match your package id with either a “.props” or “.targets” extension

Also the release notes for version 2.5 they state this:

Under this folder, you can place two files with fixed names, {packageid}.targets or {packageid}.props.

Why are these ‘notes’ not in the ‘normal’ documention section and only listed on a blog posting and in release notes?

So in-case someone else needs this information:

A new conventional folder has been created at the top level of the NuGet package. As a peer to \lib, \content, and \tools, you can now include a ‘\build’ folder in your package. Under this folder, you can place two files with fixed names, {packageid}.targets or {packageid}.props. These two files can be either directly under \build or under framework-specific folders just like the other folders. The rule for picking the best-matched framework folder is exactly the same as in those.

When NuGet installs a package with \build files, it will add an MSBuild

Note that this \build folder can be used for all NuGet packages and not just native packages. The \build folder respects target frameworks just like the \content, \lib, and \tools folders do. This means you can create a \build\net40 folder and a \build\net45 folder and NuGet will import the appropriate props and targets files into the project. You no longer need to write PowerShell install.ps1/uninstall.ps1 scripts to import MSBuild targets files!

Within the PlayScriptRedux/PlayScript.Addin there are two project guids defined for PlayScript and ActionScript projects.

These are the Project Types, not the unique ProjectGuid, i.e:

Note: I do not know of a single authoritative source for Project Type GUIDs, seems like it should be Microsoft, but I can not find a master published list on their website.

I’ve add a NUnit template to the PlayScriptRedux/PlayScript.Addin

I do not have a website for the .mpack setup yet, so grab the latest release here. 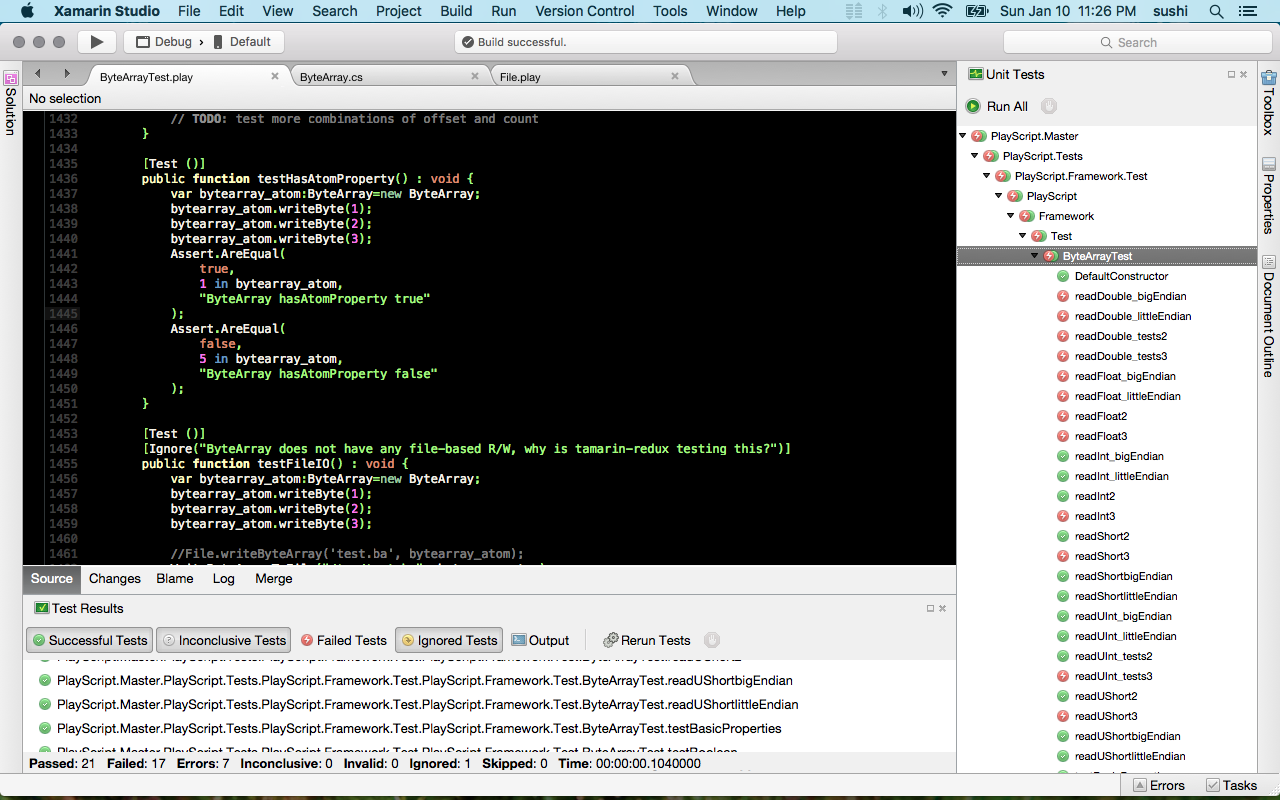 Functional, but it still needs a lot of love to be on par with CSharp’s NRefactory…