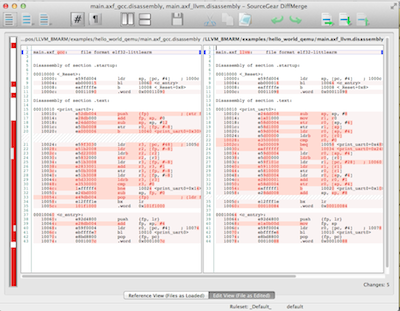 I tend to stay on the cmd line as much as possible, but for visual diffs, an ncurses console diff tool just does not cut it for me. Beyond Compare Pro by Scooter on Windows is one of best that I have ever used and with licenses at work I never had to worry about not having it on a work desktop or laptop.

But on OS-X at home, Beyond Compare was not available. There is a 4.0 release in the works (beta now), but $50.00 USD for a personal-use copy on OS-X and not having feature parity with Windows Pro features(?), I just can not pull the trigger on that purchuse when there are other (cheaper) options that work just as well for personal development.

So, normally for a free visual diff, you can not beat meld, it is a great open-source tool, but on OS-X it fires up X (Quartz for me) and it getting long in the tooth in terms of the GUI’s human factors (feature set is still great). If there was a Qt version of this, the search would be over… free or not!

So some searching landed me on an old post by Todd Huss about using DiffMerge as your visual diff/merge for git and it was actually what I was looking for, well almost ;-) It is missing a few features, but they have a free version and it works really well and has a great OS-X interface… search is over for now…

SourceGear has a $19.00 USD version that include file export with HTML formatting and if I could see example HTML code that it produces, I pay for that feature in a heart-beat, but the feature is completely locked out till you actaully register, bummer…

Todd recommends using the DiffMerge installer version vs. the dmg version, I go the other way on that. Download the dmg version, open it and drag/drop the app to your Applications. Then in a term window you can copy the Extras/diffmerge.sh to your /usr/local/bin directory (Execute attrib is already set, so no chmod needed..), but I copied it as just vdiff as that is quicker to type. No admin rights are need to install it that way and that makes me happy… I can vdiff file1.c file2.c on the cmd line to pop the GUI open and populate it.

I then used the git setup he has listed and everything is working great so far. Click on the image above to it comparing the disassembly of LLVM vs. GCC code generation for bare metal ARM development.